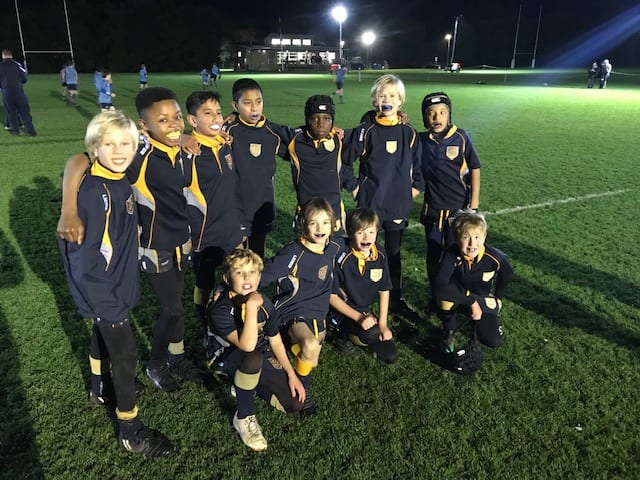 On Wednesday, the U11s side set out for the first time to Trinity School to play at match under the floodlights. All the boys were excited and raring to play. This was the first time we had played under the lights and this seemed to inspire our players.

From the start we played with aggression and put them under pressure. The boys were all focused and were making correct decisions out on the field. The tackling was ferocious and we were moving the ball very well. Ball placement and rucking was outstanding. Some fantastic tries by Ebube, Cameron, Aku and Miika and were 6 – 3 up by half time. In the second half I could see the boys were loving their afternoon and wanted to keep pushing themselves to improve. In the 2nd half we extended our lead with a superb try by Matthew who dodged and weaved his way past 5 defenders to score a diving try in the corner. All the boys played out of their skins and were truly exceptional. We won the game 10 – 6.

The Director of Sport of Trinity said to me after the game that they were the best U11 team he had ever seen! The boys and the parents should be very proud of themselves. A big thank you to all the parents who came to support and I think the big highlight was the lovely tea and coffee with the bacon and 2 hash browns in a bap after the game.

“It was a great game, boys all seemed to really enjoy it too. All played so well!”